Working For Displaced Persons and Refugees 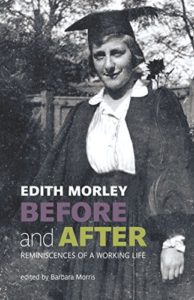 Edith Morley was appointed Professor of English Language at Reading University in 1908 after a considerable struggle over her status. She was also a badge-wearing member of the Women’s Social and Political Union. As she charts in her memoir, Before and After: Reminiscences of a Working Life, she was also heavily involved in initiatives to support refugees and assisted them with translation at tribunals. Less well known is Mabel Craven Buer’s work for refugees in Reading. Mabel, reader in economics at Reading University, became treasurer of the British Federation of University Women and managed BFUW funding for refugees, working in the BFUW office to relocate and support academic women refugees alongside the BFUW’s refugee co-ordinator Erna Hollischer, a graduate from the University of Vienna.

‘Though We Have the Vote We Still Have to Fight Every Point of Equal Opportunity and Equal Status’:

Temporalities and Texts: Abstracting as Practice of Synchronisation